US Open 2020: Holding event in New York without fans is ‘correct decision’

Serena Williams says she intends to play at the behind-closed-doors US Open in August and bid for a record-equalling 24th Grand Slam.

The event will be held without fans in New York from 31 August, despite some players voicing concerns.

The ATP and WTA Tours, suspended since March because of the coronavirus pandemic, will resume in early August.

This year’s Wimbledon Championships were cancelled for the first time since 1945 as a result.

The US Open will be the first Grand Slam to take place since the pandemic, with the United States Tennis Association (USTA) saying the decision to hold it without fans was “not easy” but the “correct one”.

A number of players have questioned the decision to hold a reduced event in New York, which has been one of the epicentres of the crisis.

“We are confident we have a plan that is safe, viable, and the right thing to do for our sport,” the USTA said.

The American has lost four major finals – including the past two at the US Open – since returning from giving birth to daughter Olympia in 2017.

“I feel the USTA will do a really good job to ensuring everything is amazing, that everything is perfect and safe,” said the six-time champion.

Williams announcing her intention to play is a boost for the event, with leading men Rafael Nadal and Novak Djokovic as yet non-committal. Roger Federer will not be fit after having knee surgery.

More details about the US Open were confirmed on Wednesday, a day after organisers said the event had been given approval by New York Governor Andrew Cuomo.

As expected, Flushing Meadows will host a double tournament with the Cincinnati Open being moved to New York and staged at the Billie Jean King Tennis Centre from 22-28 August.

The Grand Slam will take place immediately afterwards, although there will be no qualifying tournament like usual.

There will be no mixed doubles, junior or wheelchair events, while the men’s and women’s doubles will be reduced to 32-team competitions.

The USTA described holding the two events together in New York as a “historic decision for the tennis industry and sports fans around the world”.

US Open tournament director Stacey Allaster said: “The decision to hold the 2020 US Open without fans was not an easy one, but ultimately it was the correct one.”

How the ATP and WTA Tours will look

The new-look ATP calendar is set to resume on 14 August with the Citi Open in Washington, followed by the Cincinnati Open and US Open double header.

A mini-European clay-court season – featuring the Masters events in Madrid and Rome – will take place the following month and culminate in the French Open at Roland Garros on 27 September.

“Our objective has been to reschedule as many tournaments as possible and salvage as much of the season as we can,” said ATP chairman Andrea Gaudenzi.

The ATP has not ruled out allowing a reduced number of fans at events. It expects to announce a further update on the schedule, including the season-ending Nitto ATP Finals in London, in mid-July. 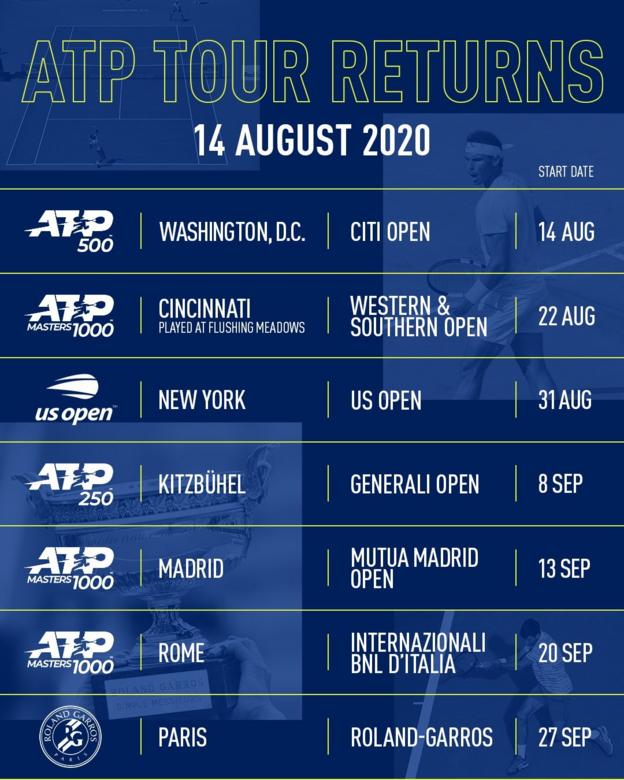 The WTA Tour is scheduled to begin on 3 August at the Palermo Open in Italy.

It will be followed by 19 other events across the world, including the US Open, French Open and the season-ending finals in the Chinese city of Shenzhen.

“It is currently anticipated that tournaments will be held without fans and each tournament will have a limited footprint, with players and essential personnel only,” the WTA said.

Pokemon Go Is Getting Mega Evolution

How many teams should the NBA bring back this season? | Hoop Streams

US Open organisers backtrack on plan to omit wheelchair events

Andy Lapthorne (left) beat Dylan Alcott (right) in the US Open quad singles final in 2019 before they teamed up...

Image copyright Getty Images Image caption People in Wales have been told to stay local - restrictions that have not...

US Open: Organisers confirm major will be staged but not everybody is on board

How many teams should the NBA bring back this season? | Hoop Streams

F1 live stream 2020: how to watch every Grand Prix online and from anywhere